“Join us and your neighbors online as we chase away the cold and winter doldrums.” — Tina Kakuske
Door Shakespeare is delighted to participate in Door County Reads with virtual play readings from one of Wisconsin most celebrated authors!
Monday, January 31, 7:00 p.m.
VIRTUAL PLAY READING:
Infancy and The Rivers Under the Earth by Thornton Wilder
To watch the performance, click HERE to go to the zoom link.
Thornton Wilder’s one-act plays, Infancy and The Rivers Under the Earth, two of the four obscure gems from his late (and unfinished) oeuvre, The Ages of Man, are Door Shakespeare’s offering to Door County Reads 2022.
To say that the state of Wisconsin served as an inspiration to Thornton Wilder would be an understatement. Born in Madison in 1897, his stories of families and friends and distant relations in small towns figure prominently in Wilder’s work, from early in his career to late. As in so many of his works, from novels to plays to essays, grown-ups influence the young and vice-versa in the most subtle of ways. It is there in Infancy, under the guise of humor, and it is poignantly present in The Rivers Under the Earth, which is set “on a point of land near a lake in southeastern Wisconsin.”
Michael Perry’s writings capture the essence of what Thornton Wilder was able to capture. Through seemingly simplistic words on the page, they share the gift of observation and are able to share with us all of the eccentricities of those individuals that inhabit small towns across the United States. And, they both hail from Wisconsin, a state that clearly influenced Thornton Wilder and continues to influence Michael Perry today.
To participate Door Shakespeare’s readings, click on the following link. The zoom link which will open at 6:30 p.m. for a 7:00 curtain time on Monday, January 31. Late arrivals will be admitted at intermission.
INFANCY cast:
OFFICER AVONZINO: Michael Wright*
MISS MILLIE WILCHICK, a nursemaid: Christine Saenz
TOMMY, a baby in her care: Duane Boutté*
MRS. BOKER: Linda Stein
MOE, her baby boy: Charles Fraser*
STAGE DIRECTIONS and Director: Michael Stebbins* 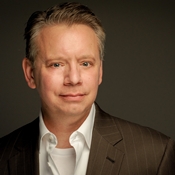 Michael Stebbins is Door Shakespeare’s Producing Artistic Director. In addition to being seen on Door Shakespeare’s stage as the Archbishop of Canterbury in 2019’s Henry V, he has appeared on professional stages across the country, from NYC’s The Public Theater/NYSF and the Mint Theatre Company, to California’s Berkeley Repertory Theatre, and many states in between. Wisconsin credits include Milwaukee Chamber Theatre, Optimist Theatre (aka Milwaukee’s Shakespeare in the Park), Skylight Music Theatre, Theatre Gigante, and Peninsula Players. Door Shakespeare directing credits include the 2021 summer production of Hamlet, as well as the virtual productions of The Comedy of Errors and J. M. Barrie’s Rosalind. Continue reading… 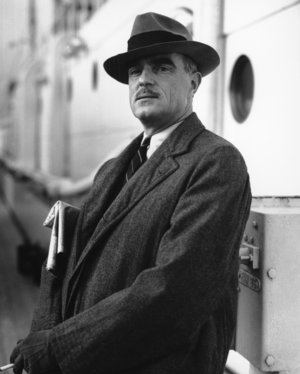 Thornton Wilder (1897–1975) was a pivotal figure in the lit­erary history of the twentieth-century. He is the only writer to win Pulitzer Prizes for both fiction and drama. He received the Pulitzer for his novel The Bridge of San Luis Rey (1927) and the plays Our Town (1938) and The Skin of Our Teeth (1942). His other best-selling nov­els include The Cabala, The Woman of Andros, Heaven’s My Destination, The Ides of March, The Eighth Day and Theophilus North. His other major dramas include The Matchmaker (adapted as the musical Hello, Dolly!) and The Alcestiad. The Happy Journey to Trenton and Camden, Pullman Car Hiawatha and The Long Christmas Dinner are among his well-known shorter plays. Continue reading…

Are You a Gardener Who Loves A Challenge?

“Now ’tis spring, and weeds are shallow-rooted; Suffer them now and they’ll o’ergrow the garden.” (William Shakespeare, HENRY VI)
It’s not spring yet, but we have it on good authority that it’s coming! And with it comes the growing season.
As many of you know, we moved our business offices and box office to Liberty Grove in late 2019. Located on 10038 Hwy 57, the property is probably best known as the original home of Celeste Wegman Interiors. In addition to giving us much needed space on the inside, the building’s ample grounds have extensive perennial beds which were established during the Wegman occupancy. Unfortunately, the building was vacant for some length of time before our purchase, and nature crept in and did what nature does! In spite of that, the shape of the beds is still apparent and many perennials are still viable.
We’d love to return the gardens to their former glory, but the project is beyond our ability to tackle, particularly as spring and summer are the busiest time of our production season. So … if you’re a gardener who loves a challenge, we could use your help in restoring the beauty of our perennial beds.
For additional information or to volunteer, contact Judy: judydrew@att.net or 920-495-0644. 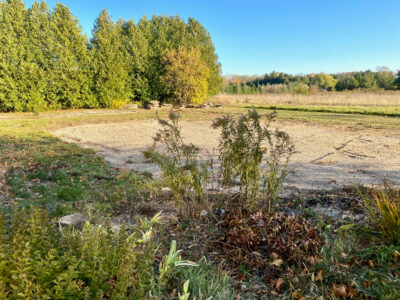 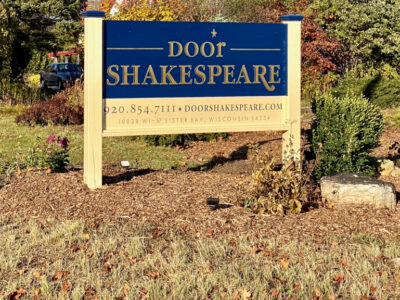 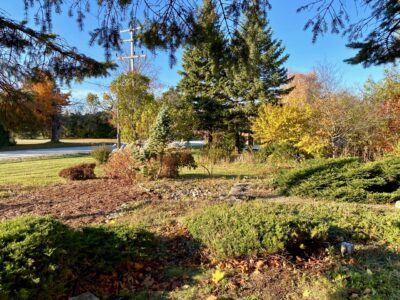