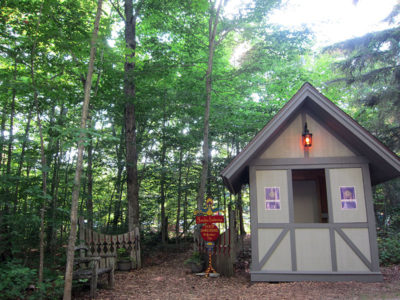 Door Shakespeare was created in 1995 under the umbrella of then-named American Folklore Theater in collaboration with Blue Circle Theatre. The first season, produced in the Garden at Björklunden, included “A Midsommer Night’s Dream” and “The Comedie of Errors,” which played in conjunction with the same acting company performing across the peninsula at American Folklore Theater (now, Northern Sky Theater).

In 1999, and with AFT’s blessing, company member Suzanne Graff and her husband, Jerry Gomes, established Door Shakespeare as its own nonprofit theater company. Since 1999 Door Shakespeare has produced 44 striking productions of classical theater in the Garden of Björklunden’s 405-acre estate on Lake Michigan in Baileys Harbor.

Over the last four and a half years, and under the leadership of Michael Stebbins and Amy Ensign, Door Shakespeare’s presence has continued to grow and has been enriched by educational programming including Door Shakespeare’s Camp Will, Will in the Woods, Shake it up Saturday, and Shakespeare in the Schools.

This past summer brought a shift of leadership as Michael Stebbins departed to pursue other opportunities, and Amy Ensign stepped in as acting artistic director.

Ms. Ensign shares: “It has been a wonderful four and a half years with Michael, and I am so grateful for the strong foundation he leaves behind. I look forward to honoring our partnership and friendship by continuing to embrace his tradition of artistic excellence.”

Door Shakespeare’s productions have been recognized and ranked in the top 10 theatrical experiences in the state of Wisconsin by The Milwaukee Journal Sentinel.

Door Shakespeare is a professional theatre company, employing members of the Actors’ Equity Association, the union of professional actors and stage managers in the United States.

Door Shakespeare is supported in part by a grant from the Wisconsin Arts Board with funds from the State of Wisconsin and the National Endowment for the Arts.

Our mission is to provide relevant and entertaining productions of the works of William Shakespeare and other classical and contemporary playwrights through artistic excellence in both the conception and performance of our plays, and to enhance the theatrical experience through interactive educational opportunities designed for audiences of all ages, thereby creating a common ground to experience these celebrated traditions.

Door Shakespeare’s performance space is located on the ancestral homelands of the Menominee Nation. Currently there are 11 federally recognized Native American sovereign nations in Wisconsin. We acknowledge these indigenous communities who have stewarded this land throughout the generations and pay respect to their elders past and present.

Door Shakespeare is proud to be a member of The Shakespeare Theatre Association (STA) and partner of the Folger Shakespeare Library. For more information visit www.stahome.org or www.folger.edu.